My Oulu: Exercise and mushrooms in the backyard

Local nature is an important place for the Niskala family, living in Haukipudas, both for recreation and harvesting.

"Everything from within a radius of one kilometre," says Henna Niskala, when listing her berry catches this year.

Six bucketfuls of bilberries, a little less lingonberry, and a handful of juniper berries to season the winter meat stews. And let's not forget the mushrooms.

“We got loads of porcini and they are a luxury on the pan,” she laughs.

"But I collected them all”, says the family´s father Marko who could stay in the woods for hours during bilberry season.

“I was the one who had to clean them,” Henna adds.

“We don’t need the car to go berry picking – it’s an effortless part of our lives. At the same time, the dogs get to eat berries, too," Henna says.

Two-year-old golden retriever Cara and six-month-old Pipsa ate berries so that their mouths got purple.

"I started to get cold in the woods from time to time, but I couldn't leave when the dogs were so concentrated on eating blueberries.”

Local nature is an important place for the Niskala family, both for recreation and harvesting. They live in Haukipudas and make such good use of their local nature and nearby forests that going abroad has not even crossed their minds.

"In the summer, when we cycled to Kiviniemi Fishing Harbour and went swimming in the cove, I closed my eyes. With all the harbour stalls, smells and sounds, it was like being abroad. The Meriniemi beach was also great," Henna says. 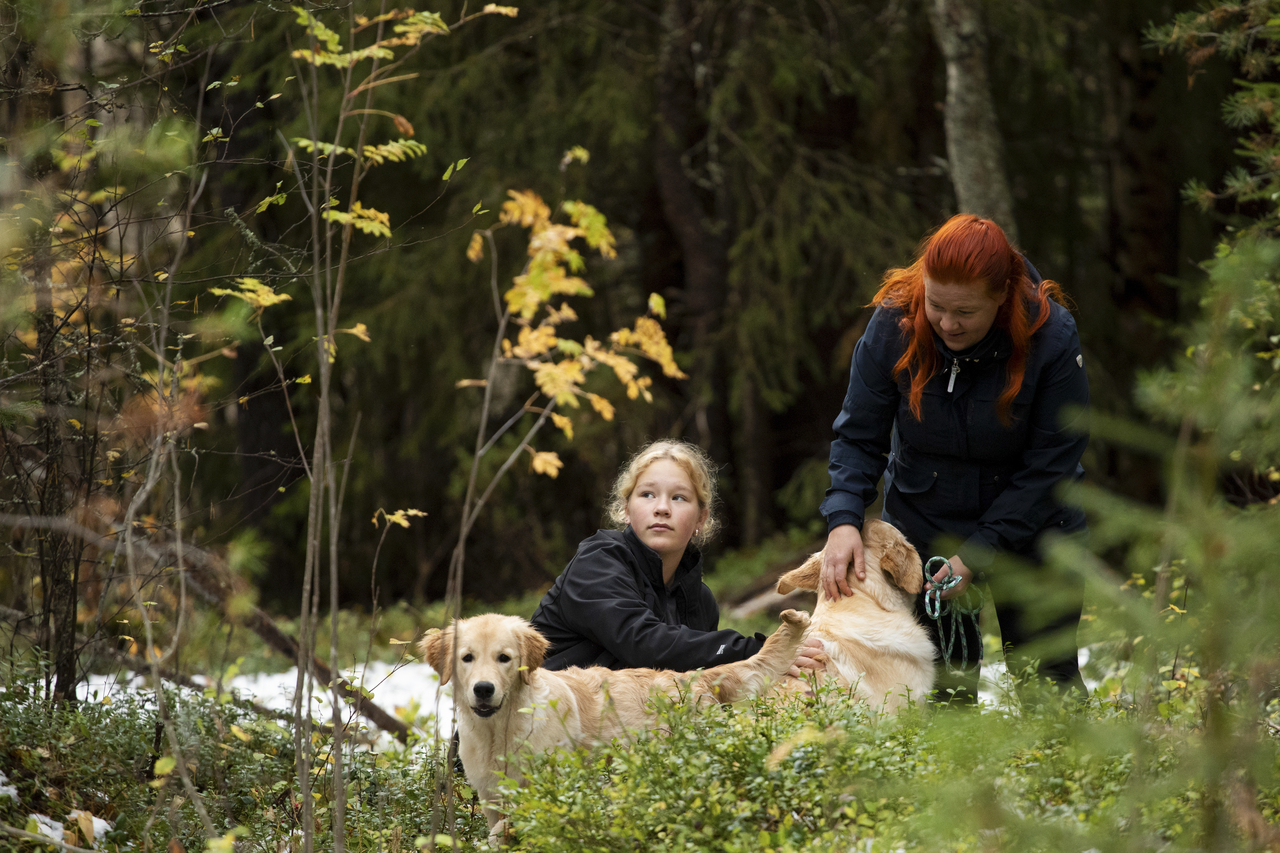 In Virpiniemi, too, the family enjoys the varied, hilly terrain. In winter, the family goes skiing and sliding down the hills, while in other seasons they exercise on the fitness tracks in the woods.

“We also like going to Runtelinharju, which is a very special place. It's so high up you can see all the way to the sea. There’s also a beautiful lean-to shelter there, up on a ridge”, Henna mentions.

The Niskalas do not even travel the eight kilometres to Virpiniemi by car, but they often go there by bikes. They know a special route to the destination along undulating forest trails, and especially Rymy, the son of the family, likes mountain biking.

"The kids like to play disc golf on the Virpiniemi course, and there are also long stairs there for a stair workout. I'd like to get snowshoes for Christmas, so we could extend our hikes to yet new routes," Henna hopes.

Pollinators in their own yard

A family's own yard can also be part of the local nature, says Marko, who has eagerly studied the lives of pollinators – they have also caused growing concern.

“The fewer pollinating insects we have, the smaller yield of berries we have, for example. They're small animals, but they're so important to nature. That's why we're setting up a strip of wildflowers in our own yard," he says.

The strip of wildflowers will be a one-metre-wide and ten-metre-long part of the backyard where the family will plant Finnish meadow flowers. Pollinators, buzzers, and butterflies thrive in them.

"It doesn't always have to be a big deal what can be done for nature, even a small effort like this can make a big improvement in the number of buzzers in a large area, even outside our property.

Henna has also grown herbs, carrots, and peas in her own yard – especially the peas turned out delicious this warm summer.

“We got several litres of peas, and next year I will sow even more of them in the same sunny place – they were so sweet. I also grew thyme, rosemary, mint, and oregano there. Thanks to them, it also smelled good in the yard.

It remains to be seen if there is a small honey factory in the yard one day, because there was a bee farm at Marko's childhood home, too.

"At the very least, we shall do our part to take care of the pollinators. Our insect hotels were filled with happy buzzing last summer, too," laughs Henna.